Who knows exactly what’s going through the mind of our sleeping babies as they rest motionless and seemingly unaware or uncaring of what’s going on with the rest of the world? Most of us assume their newly forming brains are filled with bright, happy colors and puppies and kittens and unicorns and lollipops and maybe some balloons. While that sounds nice and fun, that may not be the case unless they’re wrapped in one of the dancing brown bear afghan throw blankets.

Actually, in their first few days to the first month, they’re merely responding to different REM stimuli and no real emotional connection associated with it. Once they reach the age of one month to two months old, their response to environmental stimuli will start to occur. So when you laugh or smile at them, you will begin to see more emotion and personality in their laughter and smiles.

As their vision improves and recognition of Mom and Dad begins to show, you’ll be able to look at them and know they’re responding to you rather than some random thought. So, who knows, this dancing brown bear throw blanket may be just the ticket to influencing your precious baby’s sleeping thoughts. At the very least, they’ll be wrapped in love. 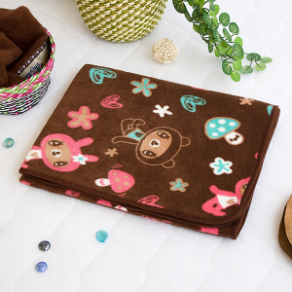 Did you like this? Share it:
Tweet
This entry was posted in Baby Products and tagged afghan throw blankets, dancing brown bear, lollipops, puppies and kittens, unicorns. Bookmark the permalink.

This site uses Akismet to reduce spam. Learn how your comment data is processed.